This is Scientific American — 60-Second Science. I'm Karen Hopkin.
Elephants don't diet, as far as we know. But their weight does fluctuate, at least for the ones who live in a zoo. Now, researchers have found that this gain and loss in an elephant's mass appears to hinge on their jaws—more specifically, the unusual way these animals replace their teeth. The results appear in the journal Mammalian Biology.
Researchers at the University of Zurich's Clinic for Zoo Animals, Exotic Pets and Wildlife were exploring how an elephant's mass tracks with its overall physique—whether the animal is jumbo-sized or svelte, for an elephant. So they gathered data on the entire population of captive elephants throughout Europe.
The clinic's Marcus Clauss is a professor of comparative digestive physiology:
"This was due to the commitment of a student I had at the time, who is called Christian Schiffmann, who was the driving force behind all this. Because Christian visited basically every European zoo that keeps elephants."
He returned with records revealing the relative heft of the resident pachyderms. At﻿﻿﻿ first glance, his observations were not so surprising.
"As in western societies, also in the zoo, a lot of beings tend to be less than an ideal body condition and a little bit more on the obese side. And elephants are just the same in that respect." 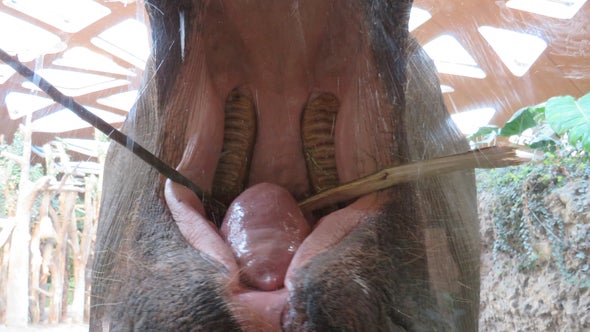 But a deeper dive into the data turned up something curious.
"And that was that once the elephants reached what you would call adult age and adult body mass, there seemed to be something like a systematic cyclicity in the data: body mass going up and down and up and down over age."
The yo-yo effect didn't sync with seasonal changes in the animals' diet. And it wasn't because some of the females were getting pregnant and then giving birth. Because the researchers saw the same thing in both breeding and nonbreeding animals.
"So it must be something else. So Christian came up with the idea maybe it's related to the tooth cycle in elephants."
For most mammals, us included, baby teeth are replaced by a full-sized adult set. But because elephants are so big, and their jaws have to grow to keep up, they go through six sets of chompers, each bigger than the last. And the new teeth don't wait for the old ones to fall out—they push them out from behind. During the process, there are times when both sets are present at once. It's not that the extra teeth themselves weigh so much. It's more like more teeth means more food processing.
"And that means either they can eat more during those times or they can chew better during those times. Eating more evidently gives more energy. Chewing better also gives more energy because for an herbivore, the finer the chew the more energy they can get out of their food."
The ultimate confirmation of a connection between molars and mass may require the cooperation of veterinarians, who can ask their elephants to hop on a scale and say (elephant trumpeting).
Thanks for listening for Scientific American — 60-Second Science. I'm Karen Hopkin.