Judy Woodruff: American troops began leaving Syria today, as a tense cease-fire held between Turkish and Syrian Kurdish forces. Where the Americans were once hailed as helping the Kurds defeat ISIS, today, many in Northeast Syria jeered and pelted American convoys with rotten vegetables and stones. And special correspondent Jane Ferguson, reporting tonight from Northwestern Iraq near the Syria border, encountered some of those evacuating U.S. forces.

Jane Ferguson: U.S. forces left the Northeast Syrian town of Tall Tamr under the cover of darkness. But protesters with signs blocked the convoys. One read, "Thanks for U.S. people, but Trump betrayed us."In the Kurdish held-town of Qamishli on the Turkish border, residents hurled potatoes. As they follow the president's orders and drive away, America's troops are leaving behind men they fought side by side with against ISIS. This weekend, U.S. Defense Secretary Mark Esper said most of the 1,000 troops leaving Northeast Syria are headed to Iraq to press the fight against remnants of ISIS. That came despite a tweet from President Trump saying he was bringing soldiers home. Today, he added some U.S. forces will stay in Syria to protect Kurdish-held oil fields from ISIS and to fight ISIS. In Kabul, Afghanistan, Esper said the move would be deliberate.

Mark Esper: This withdrawal will take weeks, not days. Until that time, our forces will remain in the towns that are located near the oil fields.

Jane Ferguson: But we witnessed a withdrawal that appears to be well on its way, arriving across the border in Iraq, a massive column of U.S. Special Forces, on their way to a new base, American flags flying, as Iraq's Kurds watched from the street. In Washington today, President Trump modified his earlier explanation that all troops were coming out.

President Donald Trump: Well, they're going to be sent initially to different parts, get prepared, and then ultimately we're bringing them home. We're bringing our troops back home. We never agreed to protect the Kurds for the rest of their lives. 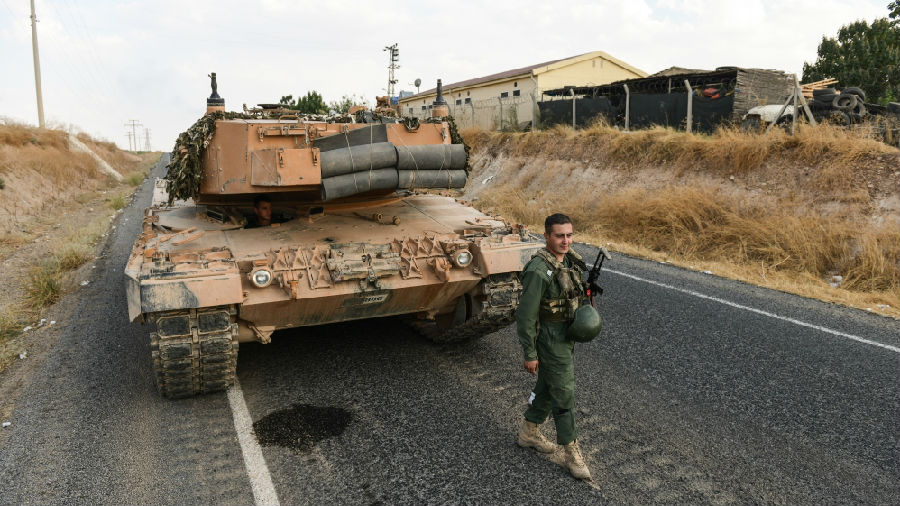 Jane Ferguson: The U.S. brokered a five-day cease-fire last Thursday after nearly a week of bloodshed along the border. It came amid widespread panic over possible war crimes committed by Turkish-backed Arab militias and the threat of ethnic cleansing against the Kurds. As part of the deal, the Kurds agreed to withdraw from within 20 miles of the Turkish border in areas where fighting is already under way. Over the weekend, there was some fraying of the fragile cease-fire, with shelling across the Turkish-Syrian border. Each side accused the other of aggression. Kurdish leaders said shelling from the Turkish army killed at least 17 people in the town of Ras al-Ayn.

Talaat Younis: The Turkish army and its mercenaries didn't stop their intensive attacks, aiming to wipe out everybody, and even now the shelling continues.

Jane Ferguson: In Istanbul today, Turkey's foreign minister said it was the Kurds who initiated. He said the Kurds were still honoring the pact, but added that Turkey would resume its operations if the Kurds don't leave the border areas.

Mevlut Cavusoglu: Harassment fires continue. I think around 30 harassment fires already came. And we lost one soldier. And we, of course, as we agreed with the Americans, we have retaliated. If they don't withdraw, our operation will restart.

Jane Ferguson: Amid the upheaval, not just fighters are fleeing, but terrified civilians too. The United Nations says more than 176,000 people have been uprooted from their homes in Northeast Syria, including 70,000 children. Some of them end up in camps like this, in Bandarash in Northwest Iraq. Here we met Kasuma Abdul, one of many mothers who now fears she may be forced to raise her children as refugees. When will you return?

Kasuma Abdul: When will it become a settled country, how we need it to be? We are afraid to return. There is shelling, warplanes and soldiers there.

Jane Ferguson: More like her arrive at the camp every day from their homes inside Syria. For people here, there is such an incredible degree of uncertainty. And that's because their lives are impacted by a foreign policy that changes by the day. One thing everyone we spoke with was certain of was who they blame for this crisis.

Kaniwar Abdul Hamid: Trump is responsible. He betrayed the Kurds. Children have died. People have been displaced. All these people in these tents, it's Trump's fault. He took the decision. He sold out the Kurds.

Kaniwar Abdul Hamid: It's not the American military's fault. It was the president's decision. The military has to follow orders.

Jane Ferguson: Tomorrow, the cease-fire between Turkey and the Kurds is set to expire. For the "PBS NewsHour," I'm Jane Ferguson in Dohuk, Iraq.