Google Claims Major Breakthrough in Quantum Computing
Google says it has reached a major breakthrough in quantum computing research.
Scientists reported Wednesday in the publication Nature about successful experiments involving quantum technology.
The team said that, in one test, its quantum computer processor was able to complete a complex mathematical problem in just 200 seconds. The same problem would have taken the world's fastest supercomputer 10,000 years to complete, the scientists said.
Researchers described the new breakthrough as "quantum supremacy." This term describes a point at which a quantum computer can perform a calculation that a traditional computer could never complete within its lifetime.
What is quantum computing?
Quantum computing is a still-developing technology, it is designed to greatly speed up the processing of information. Experts believe quantum computers could one day revolutionize many industries. Major technology companies besides Google are also working to develop the technology. They include Microsoft, IBM and Intel.
How it works
Traditional computers process information as a series of bits. Each bit can be either a zero or a one in the binary language of computing. But quantum bits, known as qubits, can be both zero and one at the same time.
These special properties can theoretically permit a quantum computer to perform calculations at far higher speeds than today's fastest supercomputers. Quantum computing could be useful in understanding complex areas of chemistry, engineering and physics. 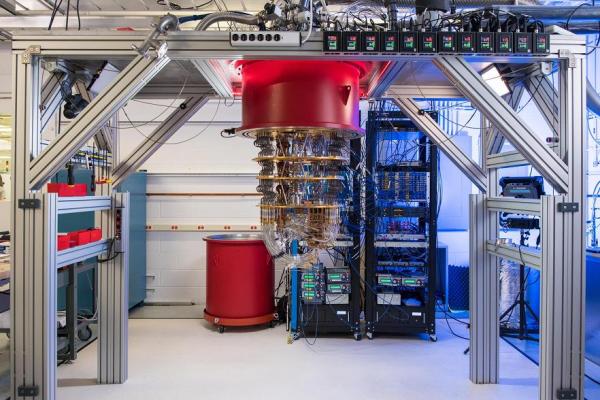 The experiment
The Google team reported it designed a quantum processor that uses 54 qubits. Researchers asked the quantum system to predict likely outcomes of a number generator similar to rolling dice for example. The problem was designed to be extremely difficult for a traditional computer to solve.
Google said its computer, called Sycamore, sampled and confirmed the correctness of all the solutions within 200 seconds. The scientists claimed this process was hundreds of millions of times faster than any existing supercomputer. They estimated a traditional computer would have taken at least 10,000 years to complete the same problem.
In a statement, Google chief Sundar Pichai said the superfast computing speed was only possible "because of the quality of control we have over the qubits." He said Google's methods also reduced the number of errors, which can be a major problem in quantum computing. "Our experiment showed the ability to perform a computation with few enough errors at a large enough scale to outperform a classical computer," he said.
Competitors dispute the results
IBM quickly disputed Google's claim that the experiment had shown "quantum supremacy." IBM is currently developing its own 53-qubit quantum processor. IBM researchers said in a statement that Google had greatly underestimated the abilities of a traditional supercomputer. They argued that such existing systems could actually complete the problem used in the Google experiment in 2.5 days, and with greater exactness.
IBM did say Google's experiment was "an excellent demonstration" of the progress in quantum computing technology. However, it said it is not correct to present the project as proof that quantum computers "are supreme" over traditional computers.
John Preskill is a professor at California Institute of Technology. He first came up with the term quantum supremacy. Preskill wrote in a statement that he considers Google's results a major step in the search for "practical quantum computers." He hopes the experiment will help push research into new areas. But he also said "much work is needed before quantum computers become a practical reality." He predicted that more useful results of quantum computing in society "may still be decades away."
I'm Bryan Lynn.